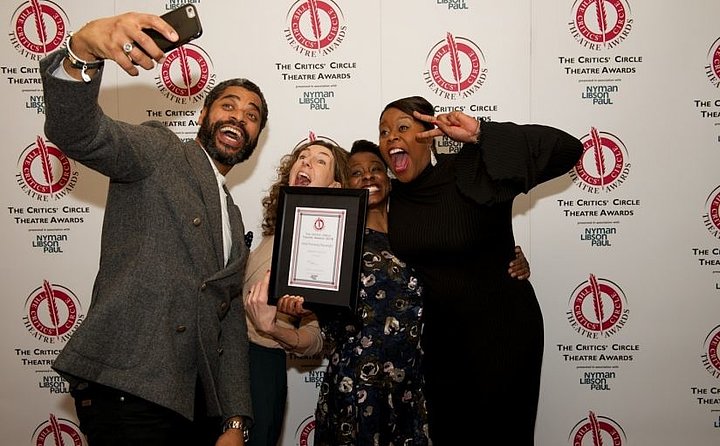 Most promising playwright Natasha Gordon and team at the Critics’ Circle Awards 2018. Photo by Peter Jones.

The Critics’ Circle Awards 2018 took place on Tuesday 29 January 2019. It was the 15th year that Nyman Libson Paul have sponsored the event, proudly supporting the best of British theatre.

Marianne Elliott’s resurrection of the Sondheim musical Company won best musical and best designer. Patsy Ferran – who won best newcomer at the Critics’ Circle Awards 2015 – received best actress for her role in Summer and Smoke. Sophie Okonedo, CBE was awarded best Shakespearean performance for her portrayal of Cleopatra in the National Theatre’s Antony and Cleopatra.

In a win for British theatre as a whole, the event trended on Twitter, the hashtag #CriticsCircleAwards reaching 1,145,391 people. This without the star power of Bryan Cranston and Hamilton that amplified the awards’ reach last year.

The Critics’ Circle Awards first took place in 1989. The awards are presented by the Critics’ Circle, founded in 1913 to protect and promote cultural criticism in the UK. Winners are selected from the independent votes of working theatre critics, free of any discussion or industry influence.

Nyman Libson Paul has been a principal sponsor of the awards since 2005. As NLP partner Anthony Pins, who attended the event, said: “We are proud sponsors of The Critics’ Circle Theatre Awards and send our congratulations to all of the Award nominees and winners. The fact that the awards are determined only by the professional critics gives them immense credibility, and are highly respected as such by the industry.”